Bupropion is known for its anti-depressant properties. It also aids to terminate smoking addiction. The Seasonal Affective Disorder (SAD) is also treated by Bupropion. It is a unicyclic, amino-ketone product whose remedial process is not well known but it is predicted that it blocks the dopamine uptake. Bupropion is sold under the brand names Wellbutrin and Zyban.

The anti-depressant, Bupropion was developed by Nariman Mehta of Burroughs Wellcome (now GlaxoSmithKline) in 1969, and in 1947 US granted a patent for it. It was permitted by the United States Food and Drug Administration (FDA) as an antidepressant on 30 December 1985, and promoted under the name Wellbutrin. However, a substantial occurrence of epileptic seizures at the initially suggested dosage caused the withdrawal of the drug in 1986. Later, the risk of seizures was found to be depending upon the amount of dosage prescribed, and bupropion was re-introduced to the market in 1989 with a lower maximum recommended daily dose.

Bupropion is used to treat depression because it can improve depressive mood and feelings of worthlessness. It may work by assisting to restore the balance of certain natural chemicals (neurotransmitters) in your brain.

Low dosage of Bupropion will be prescribed at the beginning by your doctor and gradually the strength would be increased according to your condition.

Bupropion is unlike the other anti-depressants such as tricyclic, tetracyclic or selective serotonin re-uptake inhibitors. It is a unicyclic aminoketone. In contrast to the other anti-depressants, Bupropion is relatively weak in inhibiting the neural uptakes of mood elevating neurotransmitters such as dopamine, serotonin and norepinephrine. Experiments on animals show that Bupropion stimulant effects in central nervous system (CNS) which can be seen by increase in locomotor activity, increased rate of responding in controlled operant behavioral tasks. As a result of high doses, mild stereotyped behaviors are stimulated.

The neuronal uptake of dopamine, norepinephrine and serotonin are selectively inhibited by bupropion. The effects on dopaminergic systems are more evident than imipramine or amitriptyline whereas the blockade of norepinephrine and serotonin reuptake at the neuronal membrane is weaker for bupropion than for tricyclic antidepressants. Due to the elevated levels or norepinephrine the withdrawal symptoms of nicotine are lessened and the increase in dopamine level reduces the nicotine cravings and the urge to smoke. Moderate anticholinergic effects are exhibited due to bupropion.

Bupropion is easily digested in our digestive systems. Due to the oxidation of bupropion, a glycine conjugate of metachlorobenzoic acid is formed, which is expelled from the body as a major urinary metabolite. The results of an extensive study showed that the 0.5%, out of the 200 mg oral dose of bupropion remained unchanged in the metabolic wastes. About 87% and 10% of radioactive dose were found in the urine and feces, respectively.

There are two types of Bupropion. One of them has an immediate release effect and the other has an extended release effect. The dosage of both the tablets vary according to the disorder being treated.

When bupropion is used to treat seasonal affective disorder, it is usually taken once a day in the morning beginning in the early fall, continuing through the winter, and stopping in the early spring. Sometimes a lower dose of bupropion is taken for 2 weeks before the medication is stopped.

When bupropion is prescribed for terminating smoking addiction, bupropion usually is started as 150 mg once daily for three days, and then the dose is augmented to 150 mg twice daily for 7 to 12 weeks if the patient tolerates the starting dose. Smoking is discontinued two weeks after starting bupropion therapy.

It may take 4 weeks or longer before you feel the full benefit of bupropion. Continue to take bupropion even if you feel well. Do not stop taking bupropion without talking to your doctor. Your doctor may decrease your dose gradually.

What to do if you miss a dose?

What should be avoided while taking bupropion?

Drinking alcohol with bupropion increases risk of seizures. If your intake of alcohol is frequent then talk to your doctor before changing the amount you drink. Suddenly lowering the levels of alcohol intake while using the drug can cause seizures.

Other medicinal uses of bupropion

Bupropion is sometimes recommended for episodes of depression in patients who are diagnosed with bipolar disorder (manic depressive disorder; a disease that causes episodes of depression, episodes of mania, and other abnormal moods) and also to treat attention deficit hyperactivity disorder (ADHD; more difficulty focusing, controlling actions, and remaining still or quiet than other people who are the same age).

Consulting your doctor or pharmacist before using any medicine is necessary.

The few experiments done on animals show some probability of harming the pregnancy whereas in some other experiments, no occurrence of birth defects was observed.

In any emergency situation, immediately call the doctor. Over dosage can cause troubled breathing, seizure or the person might collapse or cannot wake up. The other threatening symptoms may include hallucinations (Hearing or seeing things that are not present), loss of consciousness, rapid or pounding heartbeat.

The medicine should be kept at room temperature and away from light. Excessive heat and moisture can destructor the medicines and cause adverse effects. Do not keep them in washrooms as they have moisture. The container must be tightly closed so it is not contaminated by the environmental bacteria. The medicine should be strictly kept out of sight and reach of children. The medicine containers can easily be opened by children so it is best to keep them at the places where they cannot reach.

The medicines which need to be disposed of should not be flushed. Get rid of the medicines in a way that your pets are not harmed by them. Do not throw them in the garbage disposal. The best way to dispose of the un-needed medicines is to return them to your pharmacist.

Side effects of Bupropion

The multiple side effect which are caused by Bupropion are drowsiness, anxiety, excitement, difficulty falling asleep or staying asleep, dry mouth, dizziness, headache, nausea, vomiting, stomach pain, uncontrollable shaking of a part of the body, loss of appetite, weight loss, constipation, excessive sweating, ringing in the ears, changes in your sense of taste, frequent urination and sore throat.

Few symptoms such as seizures, confusion, hallucinating (seeing things or hearing voices that do not exist), irrational fears, muscle or joint pain, rapid, pounding, or irregular heartbeat etc. can be even more severe and must be immediately addressed to a doctor or a medical specialist.

Suicidal thoughts and behaviors in adolescents and young adults, neuropsychiatric symptoms and suicide risk in smoking cessation treatment, hypertension, activation of mania or hypomania , psychosis and other neuropsychiatric reactions, angle-closure glaucoma, hypersensitivity reactions are some other adverse reactions of bupropion.

Bupropion must be stopped if you experience the symptoms such as fever, rash or blisters, itching, hives, swelling of the face, throat, tongue, lips, eyes, hands, feet, ankles, or lower legs, hoarseness, difficulty breathing or swallowing and chest pains. Immediately consult a doctor if you feel any complexity or unusual symptoms.

Bupropion elevates the mood by increasing the dopamine levels in the patients. It stimulates the positivity is patients. Bupropion uplift the mood and thus reduces the depressive episodes. It is also observed that it increases the focus of the patients. 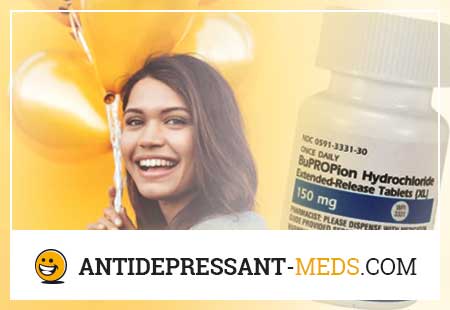 Which drugs interact with bupropion?

Bupropion should be used vigilantly in patients receiving drugs that reduce the threshold for seizures. Such drugs include prochlorperazine (Compazine), chlorpromazine (Thorazine), and other antipsychotic medications of the phenothiazine class. Additionally, persons who are withdrawing from benzodiazepines[for example, diazepam (Valium), alprazolam (Xanax) are at increased risk for seizures.

Carbamazepine (Tegretol) may reduce the effect of bupropion by reducing the blood concentration of bupropion. Monoamine oxidase inhibitors should not be combined with bupropion because of the risk of severe reactions. At least 14 days should elapse between discontinuation of an MAOI and initiation of bupropion. Bupropion may affect the action of warfarin (Coumadin).

It is advised to take bupropion with food as it may upset your stomach. Taking Bupropion too close to bedtime will cause trouble in sleeping. It should be taken on the same time daily so set reminders for the specific time. Take bupropion exactly as directed by your doctor or the pharmacist. The dosage should not be increased or decreased without a doctor’s consultation as it may cause seizure. The medicine is taken orally and must not be chewed or crushed. Inhaling crushed tablets or injecting dissolved tablets has been reported to cause seizures and/or death.

The most popular claim about its effects is that it’s indicative of a very weak cocaine-like effect when inhaled via nasal cavity. Some recreational effects have been reported at high oral doses as well. A lot of people find it never becomes recreational, however. It often just produces a state filled with tachycardia, anxiety, and tremor.

It’s primarily taken due to accessibility. People may be prescribed the drug and have it on hand or know someone who has a prescription. Many chronic users have a prior substance use disorder.

At most, bupropion offers a light form of stimulation and mood lift for about an hour (intranasal). The maximum daily dose should never be exceeded nor should it be reached with a single administration.

According to the US government classification of psychiatric medications, bupropion is "non-abusable". Though, in animal studies, squirrel, monkeys and rats could be induced to self-administer bupropion intravenously, which is often taken as a sign of addiction potential. There have been a number of anecdotal and case-study reports of bupropion abuse, but the majority of researches show that the subjective effects of bupropion via the oral route are markedly different from those of addictive stimulants such as cocaine or amphetamine. That said, bupropion via injection, insufflation is reported to be abused in the United States and Canada, notably in prisons.

The bupropion should not be recommended to the patients suffering from epilepsy and other such disease which lower the seizure threshold for example eating disorders like bulimia nervosa, anorexia nervosa, active brain tumors, or concurrent alcohol and/or benzodiazepine use and/or withdrawal. The individuals taking monoamine oxidase inhibitors (MAOIs) should also not be given the drug. The manufactures also advised to exercise precautionary measures while prescribing bupropion to the patients suffering from liver damage, severe kidney disease, and severe hypertension, and in children, adolescents and young adults due to the increased risk of suicidal ideation. A washout period of fourteen days is recommended when switching from MAOIs to bupropion.